It’s not unusual for an HVSF understudy to make their ascent to the mainstage at some point during a given season… but to embody one-third of a production in a few day’s time? Conservatory Company member Kimberly Chatterjee did just that when she learned she’d be stepping in for Stacey Yen in last weekend’s preview of our three-player MACBETH.

When did you hear the news about needing to step in for Yen? What were you up to?

I found out with the rest of the company on a Wednesday that she’d be leaving, and I knew her AS YOU LIKE IT understudy would be performing a few days later. But it was unclear for a while when Stacey would return. In the meantime, I still had rehearsals for AS YOU LIKE IT and MEASURE FOR MEASURE previews, so I started preparing just in case. I officially found out I’d be stepping in for the June 12 MACBETH on June 10–it was a bit of a whirlwind!

How did you prepare for your appearance?

My fellow understudies and I had seen the dress rehearsal for MACBETH, and earlier in the week we attended the first preview, furiously writing down what blocking we could as we watched [in contemporary theater, the director usually determines blocking during rehearsal, telling actors where they should move for the proper dramatic effect, ensure sight lines for the audience, and work with the lighting design of the scene]. 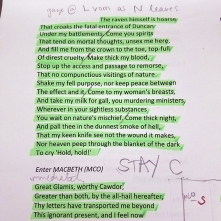 There are a lot of specific formations and stage pictures in the show that delineate scenes and character transformations, and I tried to mark Stacey’s track as specifically as possible by drawing little recreations of the stage in my script and charting her every move. The next day I had a brief rehearsal with Stage Management and Nance Williamson to write down and walk through the staging for the second half of the show, which I had yet to mark in my script. Then I was given a fresh script, redrew my charts more clearly, and reviewed the show in my head as best I could each night.

When I got official word on Friday, I truthfully had a little moment of panic, but then the next morning went straight into rehearsals with Lee Sunday Evans (the show’s director), Nance, and Maria-Christina Oliveras. We had two full days of stepping through the show, making cuts, changing some staging and adding a song, and then it was time to perform!

At the end of the day I had to trust all the reading and memorizing I had done prior to that week, and hope that the work I had put in up to that point would be enough to carry me through the show.

What was it like working alongside longtime company member Nance Williamson and the new-to-HVSF Maria-Christina Oliveras? What sorts of energy did Nance and Maria-Christina bring to the stage?

It was such a comfort knowing I was working with two consummate professionals who not only knew this show extremely well, but were more than willing to review whatever scenes or blocking I needed extra work on. My biggest worry was getting in their way by making mistakes, but they were so supportive and assured me that if I messed up the blocking or jumped a line that they would survive (which proved true, as I definitely did both at some point!).

They both brought such vibrant, commanding, and grounded energies, that as we walked towards the tent I felt empowered alongside them. I’ve never been on stage for such a sustained amount of time without any exits or breaks, and there was a point about halfway through the show that I doubted whether or not I could maintain my focus and keep myself from panicking. But Nance and Maria-Christina forged ahead and made sure to bring me along with them somehow!

Will your experience with MacB influence your performances in HVSF’s other mainstage shows in any way?

Absolutely! I learned a lot about the amount of vocal volume, resonance and enunciation it takes to be heard in the back row of the audience, and how to engage with all three sides of the tent so everyone feels included in the performance. Playing so many characters in MACBETH allowed me to play with physical and vocal variety to differentiate characters, which will inform how I play Amiens in AS YOU LIKE IT versus Juliet in MEASURE FOR MEASURE.

On a personal level, the support that this artistic community provided for me, and more so for Stacey–who was out-of-state attending to personal matters–was incredibly moving, and all those love songs we sing in AS YOU LIKE IT and MEASURE FOR MEASURE hold a little more meaning for me now.

How did the weather affect your approach?

We knew from rehearsing that day that the night was going to be cold and windy, so the wonderful Robert Serrel [Voice and Speech Coach] helped me warm up my voice and gave me tips to cut through the gusts. I still struggled with volume as the wind blew and buffeted, especially in the more intimate scenes, and the wind was so present that at times I forgot it was there and let my volume drop. But working through the wind also made me commit more fully to my lines and my actions in order to be heard. Just technically speaking, I had to clutch my script tightly to make sure I didn’t lose my page, and therefore my lines and blocking!

I think this show is lucky in that sometimes the wind can be its friend by adding to the magic and spookiness of the story. One moment that was particularly thrilling for me was Lady Macbeth’s speech after reading Macbeth’s letter: “come you spirits/that tend on mortal thoughts, unsex me here.” I felt the wind pick up behind me as I started speaking and it felt a bit like true witchcraft!